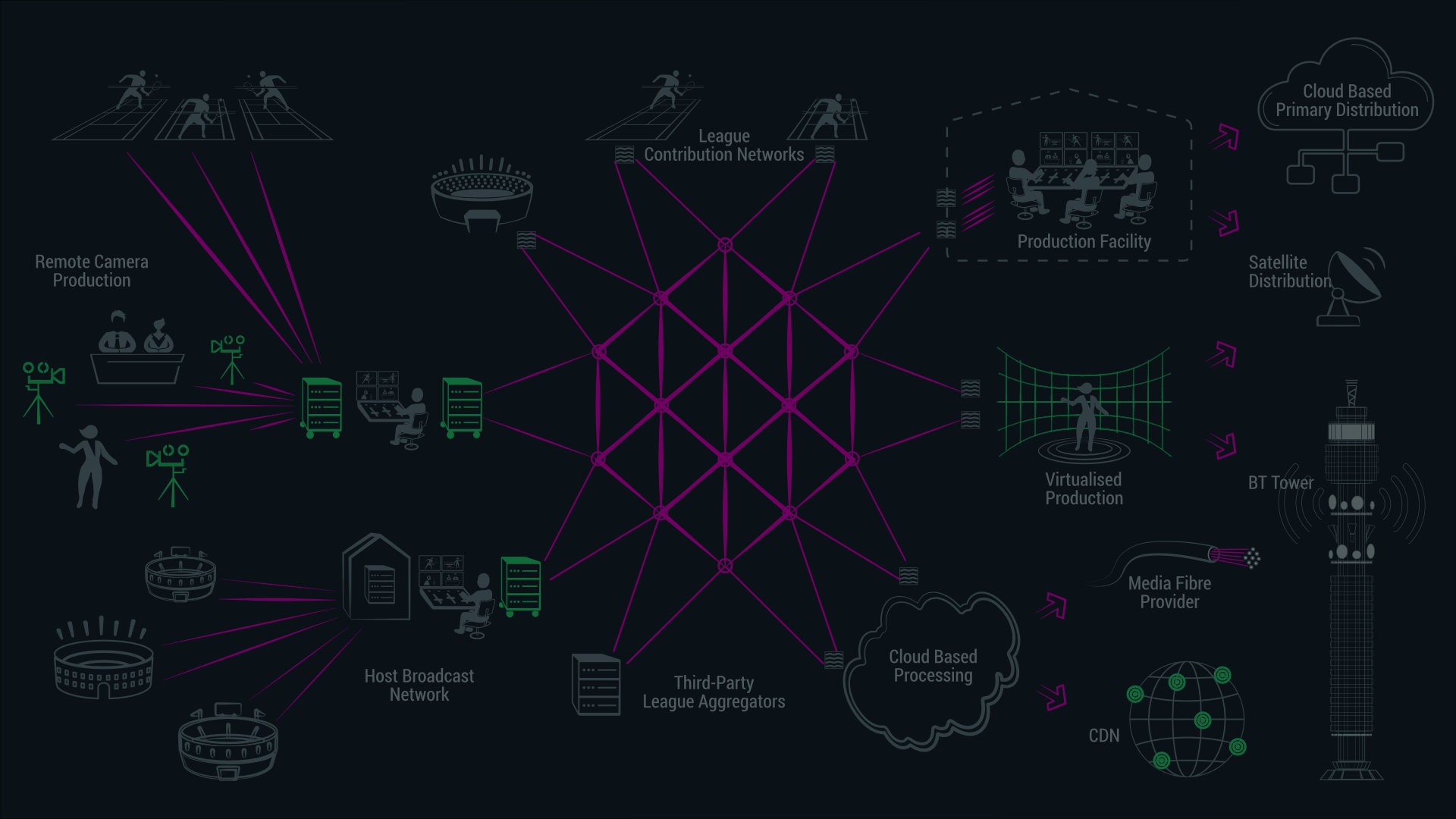 By 2020, more than half of U.S. households are expected to have 4K-capable TVs. 4K resolution refers to a horizontal display resolution of approximately 4,000 pixels wide.  Digital television and digital cinematography commonly use several different 4K resolutions. In television and consumer media, 3840 × 2160 (4K UHD) is the dominant 4K standard, whereas the movie projection industry uses 4096 × 2160 (DCI 4K). 4K Ultra HD a.k.a. 2160p – is twice the vertical resolution of Full HD (1080p).

The transmission of 4K requires high data compression codecs such as AV1 or HEVC.

Global mobile data traffic is expected to multiply by 5 before the end of 2024. Particularly in dense urban areas. 5G is the new generation of wireless technology. 5G is much faster than previous generations and also offers greater capacity, allowing thousands of devices in a small area to be connected at the same time. The connectivity and capacity offered by 5G is opening up the potential for new, innovative services. More data, more devices, near instant response.

AV1 aims to be an open source video format for the web that is both state of the art and royalty free.

Asymmetric Digital Subscriber Line – Internet connectivity where bandwidth is divided to prioritise download speeds rather than upload. This is different to SDSL.

Augmented Reality – a type of virtual reality technology that blends what the user sees in their real surroundings with digital content to enhance how the real surroundings look in some way. AR systems layer virtual information over a camera live feed into a headset or smart-glasses or mobile device giving the user the ability to view three-dimensional imagery.

Similarly, Mixed reality (MR) is the merging of the real world and virtual worlds to produce new environments and visualizations where physical and digital objects co-exist and interact in real time.

A Content Delivery Network a.k.a content distribution network or cloud CDN is a system of computers containing copies of data, placed at various points in a network so as to maximise bandwidth for access to the data from clients throughout the network.

A mash-up of the words coder and decoder, a Codec is a device or computer program capable of encoding and/or decoding a digital data stream or signal.

A high contention ratio (a.k.a over subscription ratio) is a bit like a congested road at rush hour. The higher the contention ratio (i.e. at peak times), the greater the number of users that may be trying to use the actual bandwidth at any one time.

The raw uncompressed digital frames captured or created by a Production.

The process used when working with media as individual files as opposed to a continuous stream like video or film.

Fixed Wireless Access refers to the use of existing wireless mobile network technology rather than fixed lines. FWA can provide ‘last mile’ internet connectivity for households and businesses where broadband infrastructure is lacking.

High Efficiency Video Coding (a.k.a. HEVC / H.265) should allow streaming 4K content with a bandwidth of 20 to 30 Mbit/s. Unlike AV1, HEVC requires complicated licenses and currently has a low adoption rate.

JPEG 2000 (a.k.a. JP2) is an image compression standard and video coding standard for digital cinema

Network Latency is about speed – usually measured as the Round-Trip Time (RTT) taken for a packet to pass from one point on a network to another and back again. This increases with the physical distance between two points. Low latency is crucial for quality remote production.

The term open source refers to something people can modify and share because its design is publicly accessible. The term originated in the context of software development to designate a specific approach to creating “free” computer programs. It now encompasses a broader set of values— “the open source way.” Open source projects, products, or initiatives embrace and celebrate principles of open exchange, collaborative participation, rapid prototyping, transparency, meritocracy, and rapid, ongoing, community-oriented development.

“Over the Top” refers to any content service that allows you to stream videos via the internet and not via satellite or cable.

Point of Presence. An artificial demarcation point or interface point between communications entities.

Utilising redundant equipment to ensure network availability in case of device or path failure and unavailability – a means of network failover.

Backup Equipment in a standby configuration that can take over from active equipment in the case of a hardware failure.

Also known as “REMI” (Remote Integration Model), or “at-home” is a broadcast workflow where content is captured live at a remote location while production is performed at a central main studio (hence the phrase “at home”).

Remote production is increasingly being used in broadcast video, including news and sports tournaments when building a full production suite on location is not cost-effective, is unsustainable and/or too risky.

Niche sports broadcasters can benefit from the flexibility of remote production to produce and distribute more video content with fewer resources and bigger audiences.
See examples >

A Resilient System will react to a failure and maintain operation without negatively impacting use experience. In networking terms, this could make use of load balancing, redundant equipment, a CDN and geographically diverse circuits.

Software as a Service – sometimes referred to as “software on demand” – software that is deployed over the Internet and/or is deployed to run behind a firewall on a local area network or personal computer.

Symmetric Digital Subscriber Line – Internet connectivity where bandwidth is divided equally between download and upload. This is different to ADSL.

Network topology is the layout pattern of interconnections of the various elements (links, nodes, etc.) of a computer network.

A Virtual Private Network (VPN) is a computer network that uses telecommunication infrastructure to provide remote offices or individual users with secure access to their organisation’s network.

An SSL VPN (Secure Sockets Layer virtual private network) is a form of VPN that can be used with a standard Web browser. In contrast to the traditional Internet Protocol Security (IPsec) VPN, an SSL VPN does not require the installation of specialised client software on the end user’s computer.